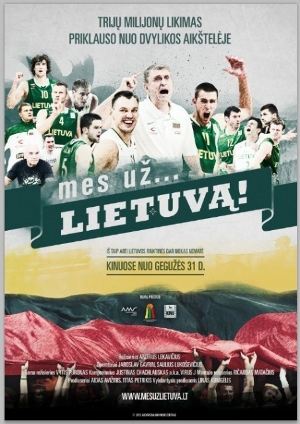 Celebration in a country of basketball. Lithuania, probably the only country in the world where basketball is routinely described as a religion, hosts the most important basketball event of the year - the European basketball championship or EuroBasket 2011. The biggest nation's pride, Lithuania's national basketball team has a long winning tradition. The entire Lithuania is waiting only for the gold. However the team's star player Linas Kleiza has suffered a serious injury and will not be playing for the championship. The players attempt to compensate the absence of the leader with a dedicated coach, who works hard to encourage believing in team spirit, a will to win, and securing a place at the London Olympics. The documentary viewers will follow the intense preparation for EuroBasket 2011 with exclusive footage from the locker room and will witness all the challenges encountered by the players in sometimes dramatic, sometimes comical situations. At last, the moment comes - it's a match day and the energy is high. The fans are waiting for the winning team. After months of the preparation, tension, and enormous pressure, the fate of 3 million is now in the hands of twelve... But the fate has brought a twist. And the team will need to rise again to become heroes of their nation